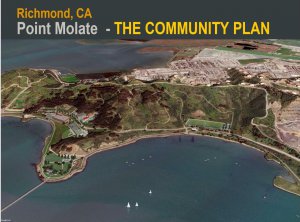 “The Community Plan is based upon what the community requested at the city workshops. Despite pressure by the city consultants to include housing, most participants stated their strong opposition to housing at Point Molate, wanting housing moved to downtown.” 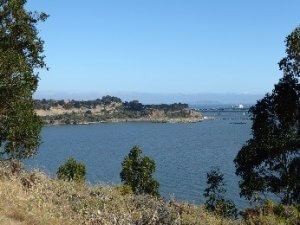 First: On racial justice, if Point Molate were in a wealthy white community it would have already been preserved as a major regional park and beach.  Click here to read the full letter.

Click here to read the responses from groups and individuals to the Draft Supplemental Environmental Impact Report (DSEIR) on the Point Molate Mixed-Use Development Project, April 30, 2020.

Why is Point Molate worth caring about? 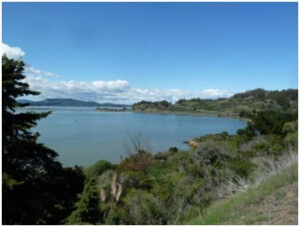 We rarely are presented with an opportunity to both undo shoreline damage and simultaneously preserve magnificent shoreline habitat and recreation plus California history. Point Molate is such an opportunity.

Point Molate has some of the most spectacular views along the Bay. If you have not visited, it sits just north of the Richmond/San Rafael Bridge. Go see the osprey as they circle above the stands of undisturbed native grasses and plants that have maintained and reestablished themselves while Point Molate recovered from being a naval refueling station.

It is home to the most successful stands of eel grass in San Francisco Bay, and to reestablished oyster beds – both essential to healthy shoreline habitat and part of the ecological barrier in protecting from sea level rise.

The Winehaven Building and District 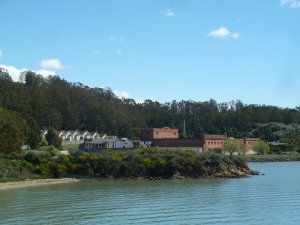 And then there is Winehaven – that spectacular castle-like building at Point Molate that was built right after the 1906 earthquake, near the beginning of the California wine industry. This National Landmark deserves to be preserved. Winehaven was the world’s largest winery before Prohibition. Winehaven is a window into the time when winemaking was becoming a major agricultural industrial player, with Winehaven having the capacity to hold and ship 12 million gallons of wine at its peak.

And Winehaven is just a glimpse of California history at Point Molate. Point Molate also contains the vestiges of a Chinese shrimp camp; the evidence of early Native American presence; cottages for winery workers; and the last active whaling station in the U.S., a little north of Point Molate on the peninsula.

Point Molate is threatened by a frustrated group of pro-developers, led by Mayor Tom Butt, who want housing and shopping for this magnificent shoreline opportunity. They want to cut short public input about the best uses of Point Molate.

This current push to develop Point Molate arises out of litigation between the casino developers and the city. An earlier pro-casino City Council (including then Councilmember Tom Butt) worked with the developers to create and approve a resort casino. The developers (a Native American Tribe and Upstream Development) paid over $5 million to the city for the rights to pursue this casino plan. However, before the development got approved, the citizens passed a measure opposing the casino and elected a new City Council which turned down the casino, with Councilmember Butt switching sides and opposing the casino. The developers sued for their money back and ultimately Mayor Butt led the charge to settle with the developer, allow development rights at Point Molate (of a minimum of 670 units of housing, plus), sell parcels and split the net profits 50/50 between the developers and City, which the City Council approved in non-public meetings by a 4-3 vote – in secret.

In response Richmond residents and environmentalists (including CESP and Citizens for a Sustainable Point Molate) sued to stop the back-room deal on grounds that secret votes violate the Brown Act. That suit is now before the same trial judge – we all await the results.

How can we Save Point Molate?

We can push to protect the open space, the osprey, Monarch butterflies; to preserve Winehaven as a destination spot; to preserve the cottages, and honor the history: the whaling station, the Chinese shrimp camp, the Native American sites, the other values at the proposed educational facility. And we can move the housing to where there is a need and the infrastructure – downtown Richmond.

The Point Molate Alliance has formed to save Point Molate. CESP (including its members and supporters), Citizens for a Sustainable Point Molate, the Sierra Club, SPRAWLDEF and other groups and environmentalists and people concerned with open government have banded together under this new banner to preserve and protect the legacy that we all want to pass along to the next generations. Let our great grandkids see the osprey flying over Point Molate, let them kayak, cycle, and play at the beach. Let the Monarch Butterfly, hawks, wild life and native plants at Point Molate provide the awe to the people who will come to see this wonderful destination point.

People will come to see Winehaven, and learn about the shrimp camp, the protected Native American sites. They may stay at a conference center or hotel complex near Winehaven. They will tell the world about Point Molate, how the residents of Richmond saved this gem. And they will be joined by the proud residents of Richmond, including ones who will live in the new housing the City had the wisdom to build in the urban core to help its revitalization.