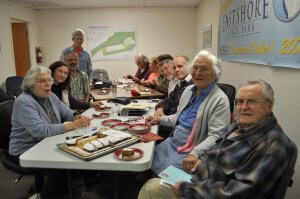 Ed Bennett served as Treasurer and Assistant Treasurer of Citizens for East Shore Parks and has been involved with the organization since its early years. He was on the Berkeley Waterfront Commission for more than eight years, and prior to that he was on the Berkeley Recreation Commission for six years. He was a member of the Sierra Club’s San Francisco Bay Chapter since 1949. He served on the executive committee as the chapter’s treasurer for more than two decades and as chair for four years.

He was also a member of numerous environmental organizations. Bennett was a research scientist at the Lawrence Berkeley National Laboratory from 1949 to 1987, and his research interests were neuroscience and learning and memory. He holds a Ph.D. from the California Institute of Technology.

Lifelong Commitment to the Environment Award from the Berkeley City Council >>